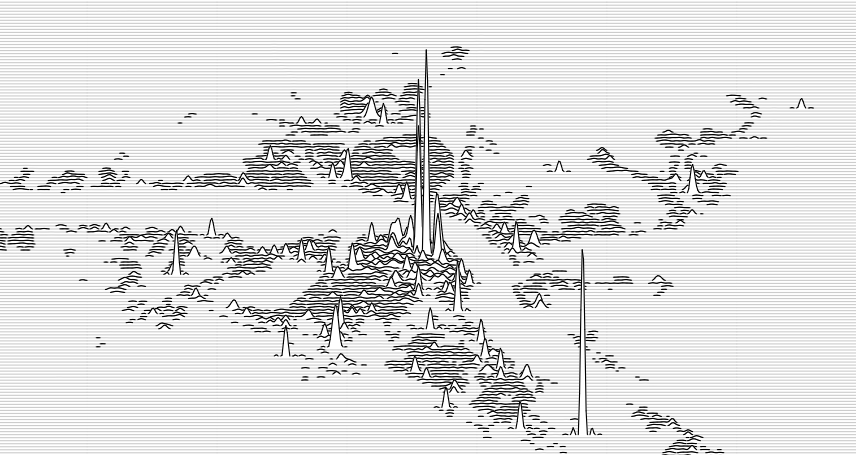 A few months ago I came across one of the most beautiful visualizations I have ever seen: James Cheshire’s Population Lines Print. What I love about it is that, in the absence of any traditional map features, the outlines of countries and continents are immediately apparent. And as long as you are familiar with what the land masses of the globe look like, you know exactly what the plot is without even needing to be told. Another interesting feature is that the peaks also give information about both the population and and the density: the area under the graph represents the total population, while the higher the peak, the more dense it is. (Hence the huge peak of Tokyo, and the low, wide peak of Mexico City.)

When I first saw the post, I went to this blog to see how he pulled it off. Unfortunately, there weren’t any details. So, I had to figure it out myself.

Well, I think I got it! I’ll show you a few of the plots first, and then describe the process below. 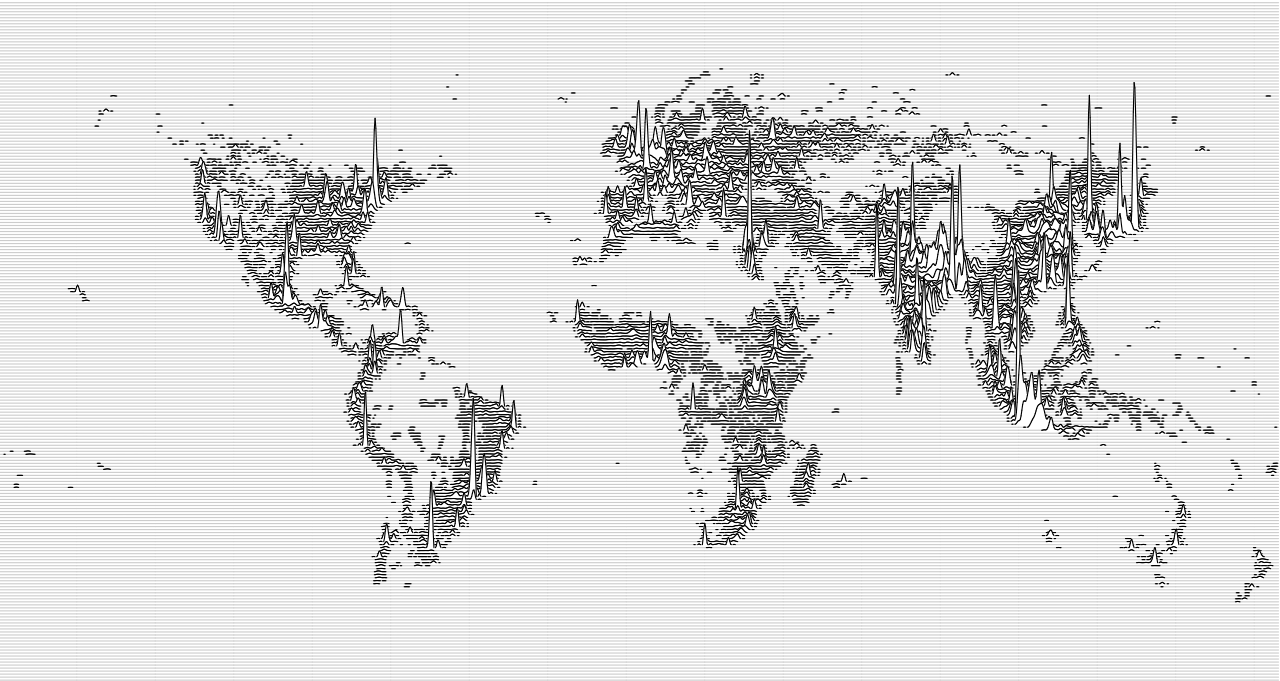 And, for my fellow New Brunswickers, here’s the same dataset of NB properties I plotted a while ago, plotted again using a line graph: 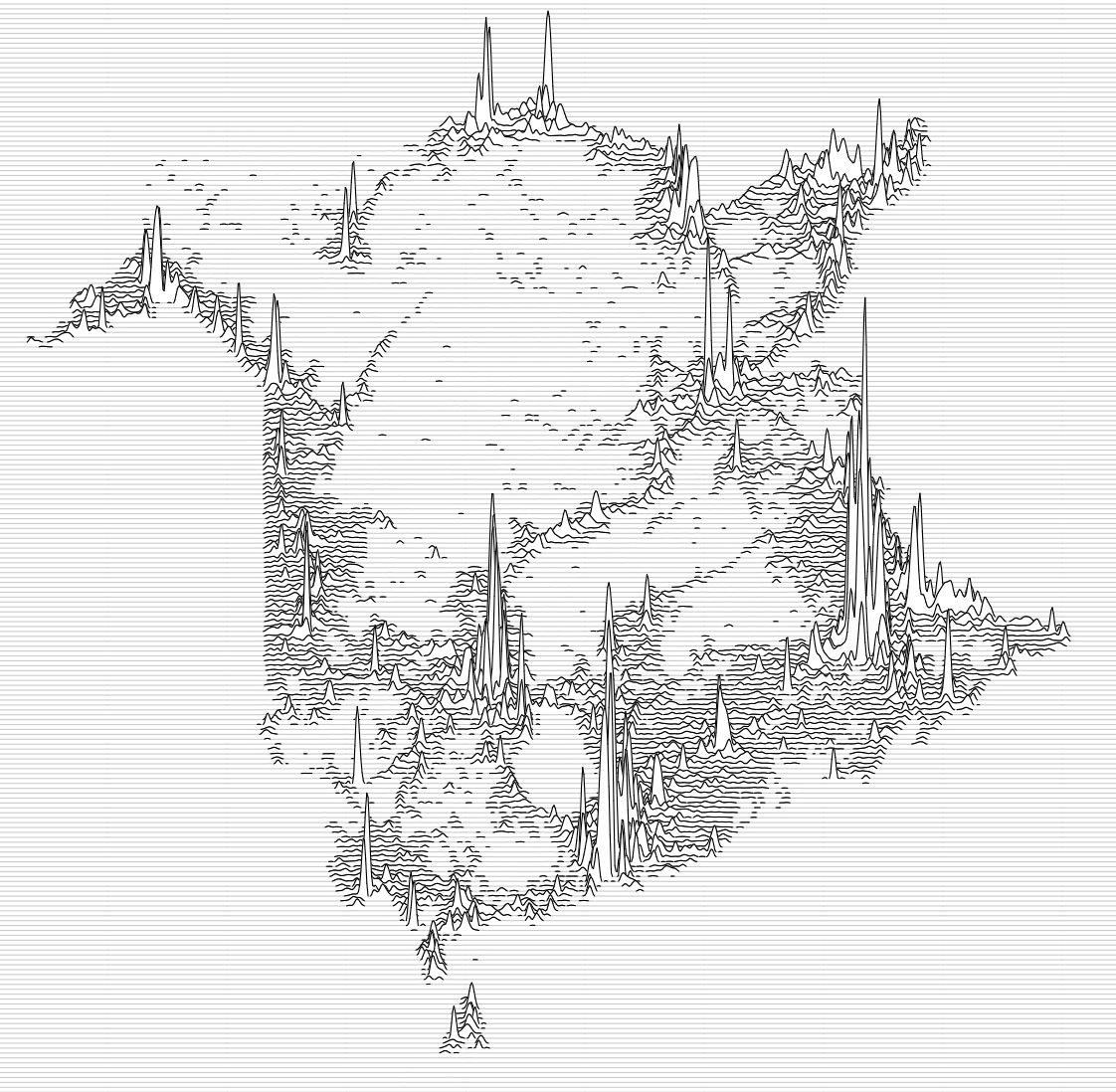 And finally, here is the property value data from my last post for Fredericton. Note that, as mentioned above, unless you’re familiar with the geography of the area, it may not be directly apparent what you’re looking at here. For those that are, you can immediately spot the river flowing through the middle of town with the tributaries flowing in: 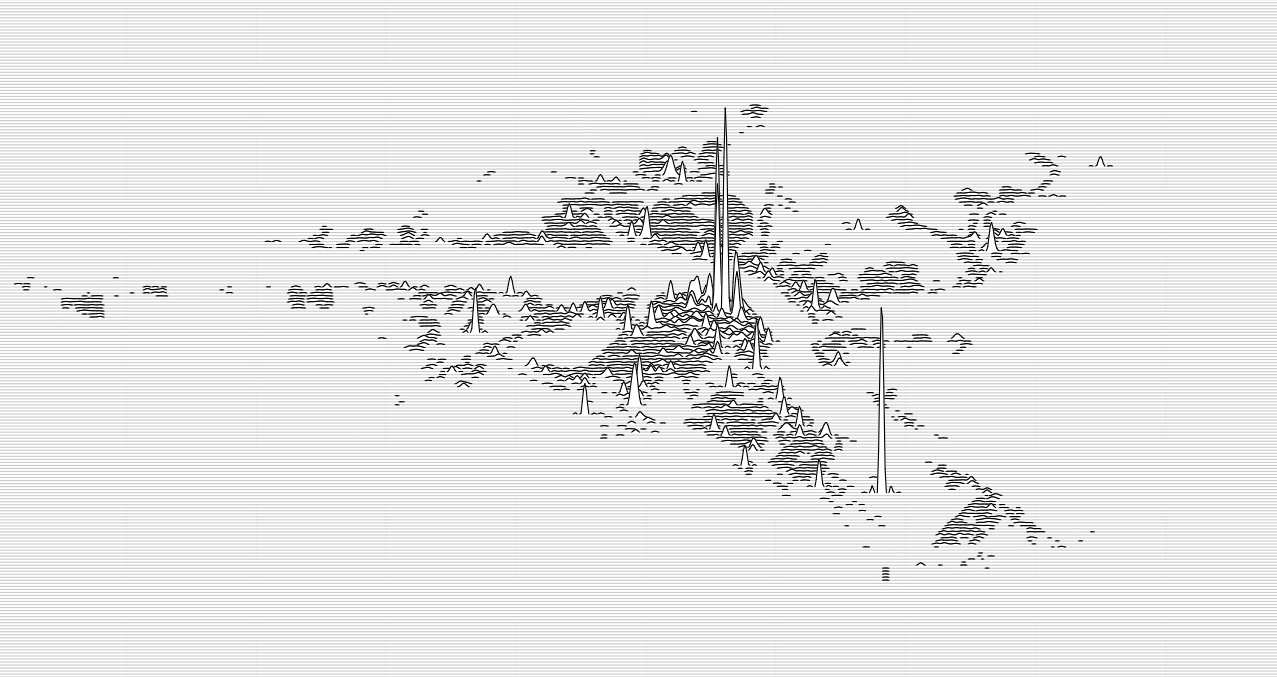 These maps aren’t the most practical ways of plotting data into a third dimension since you can’t really ‘dive deeper’ into them to get more detail, but they are certainly one of the most beautiful I’ve seen.

So, how was it done?

EDIT: I’ve updated the below instructions since this was originally published to provide an alternative to using QGIS (thanks @Zecca_Lehn for pointing out I could do this in R itself). I also improved the performance about 3x by replacing my data frames with data tables.

Well, like everything else I do on here, I wanted to accomplish this using only freely available software. In this case, I used a combination of R, QGIS and Libre Office (the latter two being optional). The work was divided into three main pieces:

All the code for processing and plotting is available here: GeospatialLineGraphs.

James originally used NASA’s population density data from the year 2000. Though the outcome should be the same, I decided to use the raw population data available here. On that page, go to download, select the format as “.ascii”, the resolution as 1/2°, and the year as 2000.

Once you’ve downloaded it, you can do either of the following to get the data into a workable form:

There, you data is ready to be crunched.

Processing the Data to be Plotted

Next, you have to take this data and turn it into something that can be plotted. The code to do this is available here: Geospatial Line Graphs - Generate Data.

The basic idea behind what this does is this:

Now, when you’re dealing with 500,000+ pieces of data, this can take a while if you’re not taking advantage of your hardware’s capabilities. In the case of the NB data, it originally took 2 hours to crunch on my 2.3 GHz i7, which has 4 cores (8 virtual), but only one was being used.

Luckily, R now has the ability to do parallel processing to take full advantage of multi-core CPUs. Marcus over at R-bloggers has a great tutorial on how to do this in R if you want to have a look. Furthermore, using data tables instead of data frames can also improve performance by, in my experience, about a factor of 3 for this computation. Using both of these together got the time to process from 2 hours to about 2 minutes for both the NB and world population data set.

To plot the data, I wrote this script which does the following:

There you have it - that’s all there is to these beautiful line plots. If you love the world map, go buy it from James here to support the work he does: Population Lines. And as always, if you have any questions, ask away below or send me an e-mail.

Hey, I'm Ryan Brideau. I work as a Senior Data Scientist at Wealthsimple. Previously, I was at Shopify. You can follow me on Twitter here: @Brideau